I was scrolling through Facebook on a Friday morning when I saw it. A restaurant where I had recently picked up takeout announced that one of their workers had tested positive for COVID-19.
And as coincidence would have it, that person had last worked at the restaurant the same night I got dinner there.
Still, I wasn’t too concerned. I had worn a mask. The restaurant employees were also wearing them. Plus, I was inside the restaurant only three or four minutes at the most. I also had no symptoms of the coronavirus.
But as an employee of the local health department, I have been encouraging people to get tested for the virus, and my coworkers were holding a free drive-up testing event that same day. Possible interaction with someone who has the disease felt like the perfect excuse and opportunity to experience first hand what it’s like to have a COVID-19 test. I decided to go to Shawnee Sports Complex.
The line that day was mercifully short. While filling out a little paperwork, I chatted with some of my coworkers I hadn’t seen in a while. One of them gave me my flu shot. Then it was time to pull the car up to another station for the COVID-19 test.
I’d heard a lot of descriptions of COVID tests. By now you’ve probably either seen one done — Governor Jim Justice recently had one live during his media briefing — or you’ve had one yourself.
One of my favorite descriptions came from WCHS reporter Bob Aaron, who did a story about one of the health department’s drive-up testing events. I believe he called it “up your nose with a rubber hose uncomfortable.” Fortunately for all of us, though, the test involves a small swab up your nose, not a rubber hose. Bob was right about it being uncomfortable, though.
When the man who did mine left it in for a few seconds, my eyes watered. He warned that he was going to twist the swab and that my eyes would water again. They did. Then the test was over.
My official review of getting a COVID-19 test — it wasn’t that bad.
Honestly, after five months of chemotherapy that requires regular blood tests, any medical tests with no needles or blood is fine by me. Even getting my flu shot was a welcome change of pace.
Two days later on Sunday evening, I checked the website they gave me for results and got the answer I had expected — “SARS–CoV2 not detected.” I didn’t have COVID-19.
Even when it’s expected, hearing that you don’t have a contagious disease is always welcome news.

My last day of chemotherapy was a celebration. At some cancer centers, a patient finishing either chemotherapy or radiation therapy rings a bell during a ceremony that signifies the end of their treatment. I’d seen videos of patients ringing the bell while cheering hospital staff look on. There are no bell-ringing ceremonies at the CAMC Cancer Center. I asked one of the nurses once and was told that’s because not all patients make it to the end of their treatment to ring the bell.
I’ve thought about that a lot these past few days.
I knew not to expect a bell ceremony, so I brought a party with me to my appointment Friday morning. Well, more specifically, I brought cupcakes. It was my very small way of thanking the oncology nurses for all the care they’d given me during my treatment.
Doctors diagnose and make decisions about treatment plans, but a good nurse can make the difference between a good day and a bad day of treatment. They’re the ones who drew blood for my labs each week and hooked me up to the chemotherapy drugs. They answered my questions and brought me a warm blanket and an occasional snack to keep me comfortable. Admittedly, 9:30 a.m. is kind of early for a dessert, but they still seemed to enjoy them.
My treatment that Friday morning went smoothly.

Two of my coworkers showed up at the Cancer Center after my treatment to surprise me with posters, balloons and roses. They had conspired with my mother, who came in from Ashland, Kentucky every week to take me to treatment. When I texted my mom that I was done with treatment, she stalled to give them enough time to get from the health department downtown to the Cancer Center in Kanawha City.
I stood outside waiting for maybe 20 minutes, rather annoyed that she wasn’t there yet, even though I had told her when I’d be done. Before too long, there came Julie and Kandy in their face masks holding big blue signs that read “We love Lorithebrave,” (a reference to a social media name for myself) a bunch of helium balloons and a vase of white, purple and pink roses.

It was such a sweet surprise. Because I’m working from home, I hadn’t seen them in person in a while. It was so good to visit with them.
My last surprise of the day was from a good friend who after work brought over a cheesecake with a picture on it of late actress Rue McClanahan, who played Blanche Devereaux on “The Golden Girls.”

The Golden Girls helped me get through chemotherapy treatment. Many nights I’d fallen asleep on my couch watching and laughing at the antics of Rose, Blanche, Dorothy and Sophia. I’d seen many of the episodes already but I rewatched the entire series. The cake also had an altered version of one of Devereaux’s famous lines from the show, “Eat dirt and die, chemo.” My friend also brought over a 6-pack of one of my favorite beers. I had abstained from any alcohol since chemo started because I read it can interfere with the drugs and cause their side effects to be worse.
My day was full of celebrations because there was so much to celebrate. I had finally made it through five months –16 rounds — of chemotherapy. I was one big step closer to being done with cancer treatment, to calling myself a survivor rather than a patient.
Chemotherapy took my hair, my energy and many nights my sleep. It made me anemic. Some days, early on in treatment, I felt so bad I cried. Other days just moving from my bedroom to the couch to work was an accomplishment.
I thought this day would never come, and now it finally had. 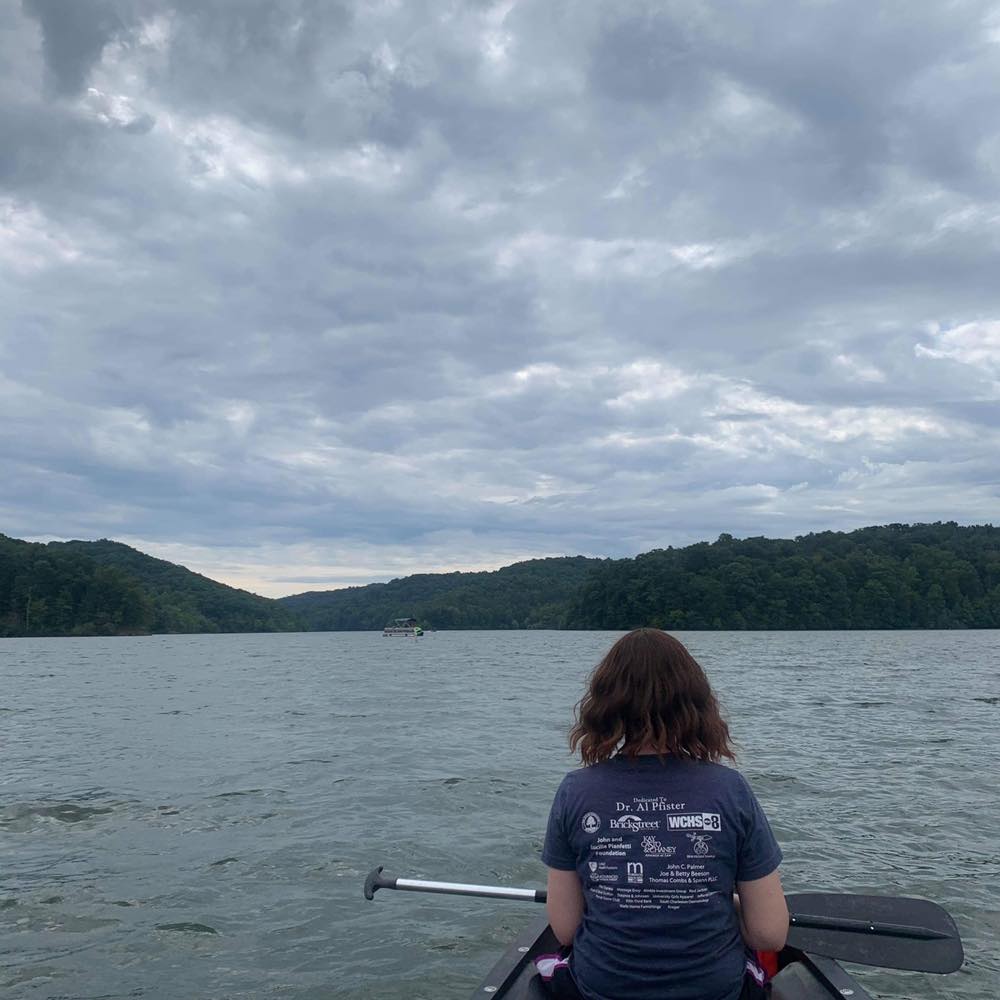 Note: I’ve decided to start posting my column here after it’s been published in the paper. This one ran Sunday, Sept. 20.

The nurse read my labs, furrowed his eyebrows and looked back at me.
“Your immune system is down this week,” he said. “It’s not a problem, it’s just at the lowest it’s been during your treatment.”
I was at the CAMC Cancer Center that morning for my penultimate chemotherapy treatment. I was so close to being done that I could practically feel the hair regrowing on my bald head. Up until that point, we’d been talking about our plans for the weekend. My friend and I were planning to go to a farm in Putnam County and take photos in a field of sunflowers.
This immune system stuff wasn’t really surprising news. If you know anything at all about chemotherapy, it’s that it weakens your immune system. Infections and viruses like the flu can be more serious in cancer patients, so even those who aren’t going through chemotherapy during a global pandemic are told to avoid sick people and take precautions. But it was news. While my red blood cells had been done previously, before then, none of my previous weekly lab tests had revealed any issues with my immune system.
You might think having a weakened immune system in the middle of a pandemic would scare me, but it didn’t. The thing about the novel coronavirus pandemic is that it’s already causing me to do everything I can do to avoid catching a disease I’m not immune to. When I’m not holed up in my apartment (I am most of the time), I’m wearing a mask, avoiding crowds, staying at least six feet away from other people and washing my hands frequently. The COVID-19 pandemic has taught me well what to do when your immunity is down.

So I didn’t change my weekend plans, though the rain on Sunday altered them a little. My friend and I decided to go to Beech Fork State Park in Barboursville Saturday. We paid $1.50 to feed the carp and then rented a canoe. It was a nice afternoon with plenty of social distance. It was so good to feel well and to be out doing something different for the first time in a while. The sunflower field closed because of rain on Sunday, so we didn’t get to go.
Speaking of things closing, did I mention I’m almost done with chemotherapy? As I’m writing this, I’m three days away from going in for my last treatment. If you’re reading this on Sunday, I’m already done.
This chemotherapy drug, Taxol, has been mild on me compared to the previous regime of Adriamycin and Cytoxan. The worst part for me was anemia, and that seems to have gotten better on its own. Many patients get neuropathy from Taxol. My fingertips have started to feel kind of funny in the last couple of weeks, which makes me think it might be the start of neuropathy, but it’s not been bad.
Despite the mild side effects, I’m ecstatic to have this part of cancer treatment behind me. All week I’ve been thinking of how to celebrate after work on Friday. I’m looking forward to growing out my hair and eventually getting back to running.
This won’t be the end of cancer treatment; I’ll have radiation next. Stay tuned to hear how I deal with the burns and exhaustion I’ve heard are so common with that form of treatment.
On another note, thank you to everyone who has donated to my online fundraiser for the American Cancer Society. It means a lot to me to be able to help raise money that benefits cancer research and supports programs for other patients.